**We want to thank you all - the hundreds upon hundreds of comments, emails, FaceBook messages, packages, cards, calls... literally every possible communication you can imagine... You have all been fantastic and have really helped Brett and I remember the goodness that has shown itself since Quinn's diagnosis.  People.com did refuse to pull the story and comments - and it was picked up in a few other outlets, as it was, but it doesn't matter any longer - we know where our hearts are, and apparently so do the vast majority of people who have heard, and continue to share, Quinn's story.

And, we are still getting through the emails and messages - so my sincerest apologies for the delay!!  I am trying to get back to every one - but phew! it is tough work being Miss Q's press secretary :) **


Brett and I have had a few very untimely trips in our 11+ years together.  Two weeks ago, though, we had the good fortune of have the world's timeliest trip.  Ever.

Four days following The Ordeal of The Comments, Brett, Colin, Reid, Quinn and I boarded a plane for Florida for a whirlwind Family-Disney-Family extravaganza!!

On our second day of the trip, we headed to the Mecca of all children - Walt Disney World!  (Colin wanted to know why Nana wasn't coming with us haha)

We spent the next two days and nights having so much fun!!!  We did Magic Kingdom only since we there for just the two days, and to us that is Disney.

There were lots of rides, lots of food and lots & lots of fun.

We had breakfast at Chef Mickey's - where we were greeted by such a simple yet cool reminder of why we were there.

We also had a sweet hostess who asked us what we were 'celebrating' (see above - the ambiguous "Quinn's Personal Triumph" under the Celebrations heading).  Brett and I stumbled and sputtered - the boys directly underfoot - and bless Mabel's heart, she 'got it' pretty quickly.  She announced we had three special children with us that day, and marked them all down for birthdays at the breakfast :)  That meant a song and dance by all the characters (Mickey, Minnie, Goofy, Donald and Pluto) AND - more importantly - a cupcake.  At 8:15am.  LOL.

Some sweet friends also sent us a gift certificate for haircuts at the Barber Shop on Main Street.  The boys got great cuts and a generous dose of pixie dust, which caused Colin to run full speed and jump for a full hour afterwards.  When we finally told him to STOP!, he very earnestly replied that he was trying to fly - after all, he had been doused with pixie dust!

And Quinn received her first cut, along with the cutest First Haircut Mickey Mouse Ears - so sweet.  And, it was really a great cut for her wild mane!

On Thursday, we hightailed it out of our hotel to hop on a plane to Miami.  (Ok - we didn't quite hightail it, because that would assume we actually made our Disney bus back to the airport.  Which wouldn't quite be true.  But our luggage did, so at least we didn't have to schlep that in a cab.  Nope - just us and three kids, dopes that we are!).  Regardless of how we got there, we did get to the next leg of the trip with plenty of time to spare - our Disney cruise!

(When we made the trip plans four months ago, we had nooooo idea what our life would be like at this point.  Logistically, it just seemed to make the most sense to do something Disney-related but a bit more low-key than a week at the parks.  The Magic Kingdom stop was actually an add on later - how could we be in Florida and not bring her to actual Disney World?!)

We spent the next 3 days / 4 nights on board the Disney Wonder and it was great!  Brett and I are not really cruise people - we like to go to a destination and really get to know it - but it was so perfect for this trip with Quinn and the boys.  We had two pretty small ports (Key West and Castaway Cay - Disney's private island) in addition to Nassau, which we made into a small-port-feel by jumping on a ferry to a private island - Blue Lagoon Island - for swimming with the dolphins!!

Unfortunately the weather has been chilly in Florida and the Bahamas the past few weeks, so the water was unseasonably cold.  Quinn would have none of it haha.  She was kissed by Andy - our dolphin - but I'm pretty sure she didn't even know it, she was just flipping out because of the cold water.  I sat out with her after the one shot while Brett, Colin and Reid danced with, hugged and kissed the puppy dolphin.  It was really super cool and I'm so glad they got to experience it and Quinn and I got to watch!!

The most special port we visited was Disney's Castaway Cay.  We had our own cabana there and it was so wonderful.  Brett and I agreed we could spend an entire vacation right in that little cabana! 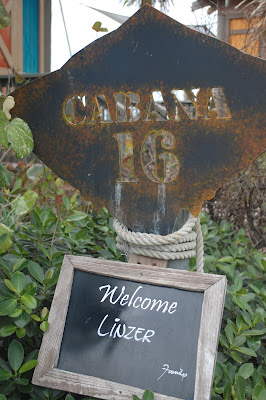 I am so glad that we made the cruise the crux of our trip.  We still got a lot of "Disney" out of it but it allowed us to relax a little bit and not be scrambling through hoards of people, waiting on line for rides for a whole week.


We wound up the trip with a visit to Brett's dad and his wife.  It was very special to have Quinn visit since it will almost definitely be her only one.  We had a nice relaxing down day our first day with them.  Our last day the boys got to go bowling (both scored a 60, which truth be told, I find very impressive lol) and we all went to Butterfly World!

Oh wow - it was really a great place!  It's in Coconut Creek if you're ever in the vicinity (outside Fort Lauderdale and Boca Raton).  Quinn even had a butterfly land on her - you might even say she was Kissed by a Butterfly :)  And the boys - though butterfly-landing-less - did get to feed some really crazy birds, and had a great time doing it!

It was without a doubt a great trip.  Quinn had a fabulous week - smiles, laughing, truly enjoyed herself - and so did the boys, which in turn made us have a fabulous week as well.

It was also a very emotional week.  I semi-expected it to be, but for what turned out to be the wrong reasons.

I thought all the little girls - in their princess garb, their running to daddy, their little pigtails - I thought they would make me swoon and wish mightly for all the things I am just not going to have with Quinn.  Don't get me wrong - they did, of course - but it wasn't them so much as Quinn herself.

She's so fragile.  So very very very fragile :(  It's still winter weather here in NY, so she's generally bundled up - at least in long pants and shirts.  Outside of a quick bath or change of clothes and diaper, we're not seeing her body very much at any given time.

While we were away, she was in bathing suits and shorts and tiny rompers.  And she is beautiful - she is SO beautiful.  But she is also so skinny.  And so distended.

I had to bathe with her while holding her in the tub because we couldn't bring the baby bath with us and Quinn can't sit up.  It was always after a long day of fun - smiles and leg kicking and lit up eyes.  All followed by a bath where the entire time I felt like I was going to break her every time I moved her.

And I just kept thinking,

Because you should be able to keep your baby.

This caused many a late showing for dinner, but thankfully everyone was a good sport and in great spirits.  I managed to catch my breath and we did go on to have a good time, but I would have traded every second of it to be sitting home in NY, cursing the snow and bitching about the following morning's commute - because that would have meant I was able to keep my baby. 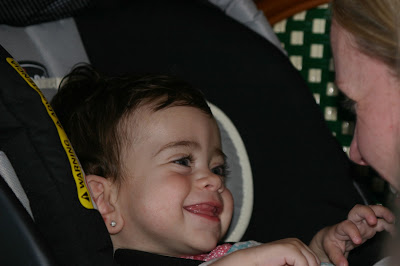 
Swimming with the dolphins


Kissed by a Butterfly