The absence of updates was not quite by accident, and for that I apologize.

Quinn was moved out of PICU on Friday - just hours ahead of Blizzard Nemo - into a regular room.  Fearing getting stuck away from her and having something happen, the boys were shuttled off to Grandma's to get snowed in and Brett and I shared a sleeper chair the approximate size of a large toddler bed next to Quinn's hospital crib.

On Sunday, Brett and I managed to negotiate her release - something akin to a hostage situation.  Her care at Cohen's Children's Medical Center was impeccable (save one Fellow in the PICU) but we are constantly in the position of having to remind her physicians that our goals are not the same as standard protocol.

We did manage to sneak her out, though - and Brett didn't even have to pull a Patrick Kennedy to do so :)

The next three days, however, were not great.  (Not great being quite an understatement)

Quinn was not only not herself, she was extremely uncomfortable no matter what we did and it was both logistically and emotionally taxing for everyone.  It got to the point that I began to fleetingly second guess our decisions last Monday to make interventions - because the way Quinn was feeling was truly no way to live.  And without any idea as to what precisely was making her feel that way we had no idea how to help her - and more to the point, if it would ever change.

Ironically, it turns out the thing that Quinn really needed was time.

Valentine's Day has never been a holiday to me - even though I was always 'the boyfriend girl'.  Mushy, lovey-dovey is not really who I am or anything I'm very comfortable with.  That said, I had the BEST Valentine's Day of my life yesterday - and I suspect nothing will ever surpass it.

Because this was my present: 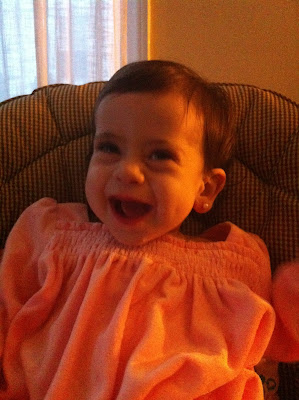 You'll have to forgive the fuzziness of the photo - we had to do it in low lighting because this is what was going on on the other side of the room:


My poor babies have really had a rough few weeks with Quinn in the hospital for four days during her surgery, then waking up a week and a half later to find we'd gone in the middle of the night for another week.  During that week was Colin's 5th birthday, which was celebrated with an ice cream cake in the lobby of CCMC.  And his birthday party was supposed to be scheduled for that Saturday - the day after the Blizzard, so it was obviously cancelled.

They both made it to school - wearing their Valentine's Day best (a red Spider-Man shirt for Colin, a blue one with Chicks <3 Superheroes for Reid) and hair all duded-up by daddy.  Colin lasted 1.5 minutes (the time it took for Brett to walk Reid to his classroom) before throwing up all over the place.  Reid had a stronger showing - we got the call for him around 12:45.

Quinn's still not 100% - that'll take even more of that pesky time - but we see glimpses and right now, that's enough.

So boys, I'm very sorry that when you read this post in the future and remember this as a horrible Valentine's Day you see me saying it was the best one ever.

But it really was :)