Thanksgiving to New Year's is nuts - for everyone, of course.  But it is especially so for interfaith families who celebrate both, practice neither.  This entails Thanksgiving, 8 nights of Hanukkah, no less than 4 Christmas parties, 2 holiday work parties, and a partridge in a pear tree.

It's crazy and it's stressful - and it's generally a TON of fun.

This year we had the added stressor of my final days at my job, which included a lot of work closing it out, paired with a side of grouchiness as I prepared to exit that (very large) part of my life.

And truth be told, Quinn hasn't had a great couple of weeks.  She is down almost an entire pound, on a body that is barely on the charts as it is.  There is discussion of home health nurses after the new year and it is just so demoralizing to consider that she may have an extremely severe case of one of the most severe genetic disorders.

So of course our goal was to make this simultaneously the most extraordinary and most routine holiday season ever.  For while we wanted to give Quinn a tremendous December - after all, ♪ It's the most wonderful time of the year ♪ - we also want her to simply slide into our existing traditions, which goes hand-in-hand with making fabulous memories.

Thanksgiving was lovely and small at uncle Brian and aunt Maria's house - a great start to the season.

That weekend was our first Christmas celebration - our first annual kids' holiday party for the families on our block.  Colin & Reid's friend Luke was a perfect host (read: Luke's awesome parents know how to throw fabulous a party) and Quinn had her first (of four) Santa meet and greets! 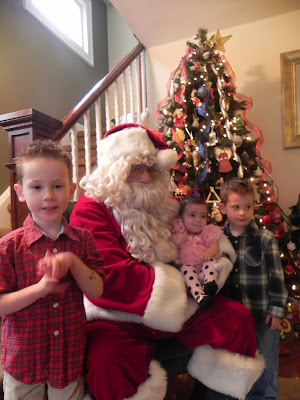 We had a great time celebrating the first two nights of Hanukkah by attending our town's Menorah lighting ceremony with Grandma on the first night, and by decorating our Christmas tree immediately prior to lighting the candles and giving the kids Hanukkah gifts with Nanny on the second night.

The final night of Hanukkah was spent with our extended "step" family at Popsie's house with good number of latkes, a bunch of jelly donuts and too many presents!

And last night we had the pleasure of riding the Essex Steam Train to the North Pole!  An old friend of mine from high school actually drives the train on the weekends and invited us up as his guests.  Holy cow - it was sooooo cute!  The boys could not have been more excited to go to Santa's house.  Cookies and hot chocolate were given out, carols were sung and there was even a special gift that Santa dropped from his sack that just so happened to have The Linzer Family name on it - five jingle bells, each of our names on them.


It is exhausting living each moment to its fullest, but Quinn has taught us that living any other way simply isn't living.  We even included the sentiments in a sort of pay-it-forward attempt on our holiday cards, from Henry David Thoreau:

Live in the present,
Launch yourself on each wave,
Find eternity in each moment

And truthfully, somehow the most extreme of circumstances - such as the one we find ourselves in - has actually allowed us (read: me) to just chill out.  (Brett even politely inquired if I had ingested any mood altering drugs on Christmas day because I was so non-plussed as we awaited the arrival of our 16 dinner guests haha).   Because really - who cares?!  What's going to happen - dinner may be 20 minutes later? The biscuits may not make it to the table?  The shirt bought for the cousin's aunt's stepdaughter's dog isn't the right color or size?

None of that matters.

So yeah, ok - maybe even the Grinch had it figured out before me, but I got there eventually.  And just in the nick of time. Because who would want to miss one minute of this face stressing about the perfect proportion of candy canes to red velvet bows on the tree? 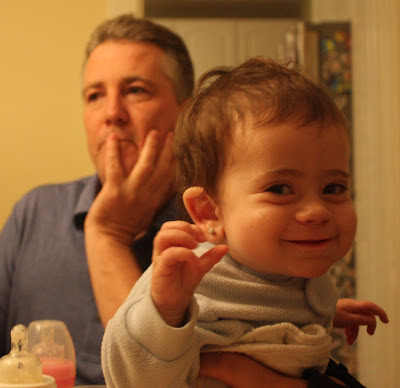 Quinn's Wing(wo)men: her friends and family