Under The Big Top World

A few weeks ago, Brett received an email from his friend Darren stating simply he wanted to help Quinn knock something off her list. What was attached was a gift certificate to The Big Apple Circus!

We got tickets for the day after Thanksgiving. Now mind you, the only circus I have ever been to is Ringling Bros, and I'm pretty sure I've only ever seen it at Madison Square Garden (which bills itself as the world's largest arena most famous arena (thank you Brett!  you'd think after working in the same building for 5 years, I'd know that by now)). So I was envisioning a fun but non-relaxing day in the city.

What I got was anything but!  The Big Apple Circus is in a TENT - a for real tent! - in the plaza at Lincoln Center. There were maybe 20 rows in the entire place and one ring. Read: Perfect for a family with wee ones.

The acts were phenomenal - mainly human acrobatic acts that were seriously incredibly. A woman shot a dart and popped a balloon. Upside down. With her FEET. Freaky stuff!


We did have to keep Miss Quinn's hat on. Not for warmth but to help muffle the noise!  (Note to self - beware of the fireworks at Disney...)

The boys had a great time - Colin was giggling out loud at the clowns and Reid loved the ponies. Afterwards we picked up sandwiches and snacks from Starbucks and stopped at a playground to eat. 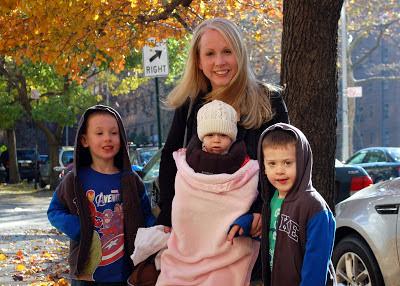 We really had so much fun!!!