Quinn was the product of some serious negotiations.  Brett was content with two kids.  I love the boys tremendously but felt like our family just wasn't quite complete yet.  We talked, I relinquished some responsibilities at work, we talked some more, we compromised.  And so was created my little Soul Sister.

As with Colin and Reid, we opted not to find out Quinn's gender until she arrived in the world.  I had a suspicion my entire pregnancy that she was, in fact, a She but kept thinking that couldn't be true - we make boys!  Plus I was scared of girls.  I remember how ahem, pleasant I was from the ages of 10-18.  I was also rebelling against the ridiculous notion that was so often professed by complete strangers - that we "went for the girl" with this third pregnancy, as if my boys weren't quite what we wanted - being boys.  Utter stupidity.

When Quinn was born, my OB announced "you have a Female!" and proceeded to bring her around the curtain of sterility to prove it.  And a female she was. 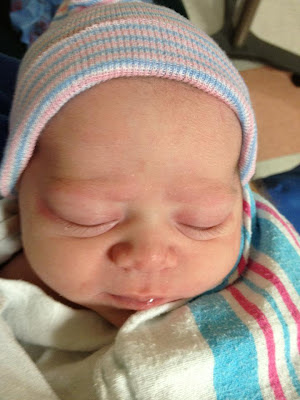 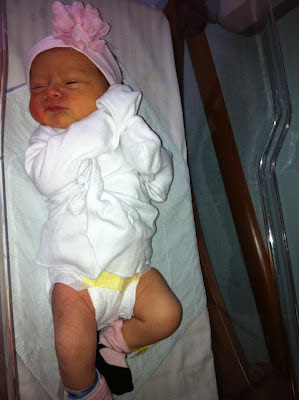 still in the hospital - got into the girl thing pretty quickly!

Quinn's swallow issues started immediately so literally from birth, she was in my arms 24hours a day.  She and I lived in a corner of the sectional in our living room where she ate and slept on my chest every day and night for the first 7 weeks of her life.  It was difficult recovering from my c-section and trying to rule over a 2.5 and 4 year old from my perch there, but it also made for some incredible bonding time, for which I am especially thankful now.

Quinn is a happy baby - she readily smiles, she's beginning even to squeal!, she manages to get herself pretty comfy in most everyone's arms.  But I am (not-so-)secretly thrilled to admit that she does have a special sort of excitement when she hears my voice or sees me come into a room.

one of my new favorite videos 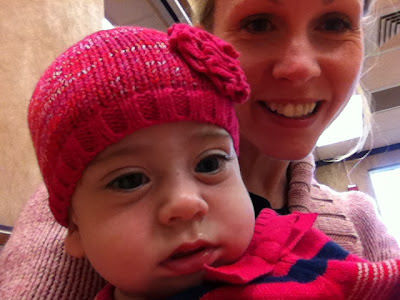 The feeling is mutual ;)

And while I'm fairly certain Train was not thinking of mommy and daughter when they recorded "Hey, Soul Sister", it has become our Anthem, me and Quinn.  The words (almost) exactly match how I feel about this amazing little girl.  The almost referring to perhaps "You're so gangsta, I'm so thug".  Really, it's the other way around.

(Oh, and "my untrimmed chest".  That doesn't quite jive either.)

I knew I wouldn't forget you
And so I went and let you blow my mind
Posted by Unknown at 6:56 AM